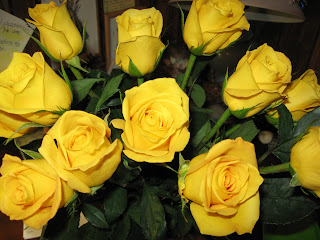 Joy is the province of the believer.  Though we have not seen Jesus we love Him.  Though we do not see Him now yet we believe in Him and rejoice with joy that is inexpressible and filled with glory.  And the outcome of such faith?–the salvation of our souls.  (Can I cite this verse here without being derided for holding such a silly faith that has no evidence to support it?  What a relief.)  What a joy!  And enough of it to share with the whole wide world.

Joy to the world!  The Lord has come.  Let earth receive her King.


But alas, Jesus came to His own and His own did not receive Him.
But to all who did receive him, who believed in His name, He gave the right to become children of God.


I have a new appreciation for my faith these days.  It has become a precious commodity in a forum of people who find it not merely an enigma, but a maddening (un)reality.  Their world knows no sin, no Saviour, and no Good News.  They resent certainty, faith, and I suppose, Joy.


I am ready for a holiday, a holy holiday to celebrate the real live birth of my real live Hero into a world that needs Him more than we know!


Joy to the World, our King has come.


Wishing you and yours a joy-filled holy holiday!!!


“Glory to God in the highest, and on earth peace among those with whom He is pleased!”
“And without faith it is impossible to please God, for He that comes to God must believe that He is and that He is a Rewarder of them that diligently seek Him.” 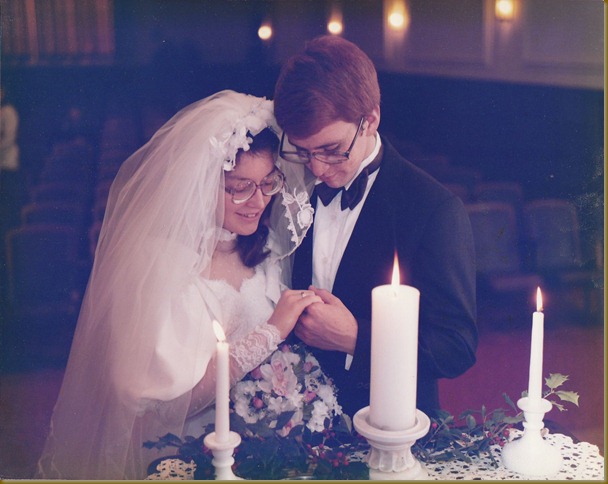 “Who am I, O LORD God, and what is my house, that you have brought me thus far?  And this was a small thing in your eyes, O God. You have also spoken of your servant’s house for a great while to come and have shown me future generations, O LORD God!

For your servant’s sake, O LORD, and according to your own heart, you have done all this greatness, in making known all these great things.  There is none like you, O LORD, and there is no God besides you, according to all that we have heard with our ears…”
I Chr. 17:16-20

It’s been twenty-seven years today since we stood side by side saying our vows before  Reverend Bradford, my grandpa.  It was the week before Christmas.  The familiar chapel was bright with poinsettias.  We were young and in love.  The season only added to our wonder.

The organ swelled with Beethoven’s music as all joined to sing: “Joyful, joyful we adore Thee”.
Joyful, joyful we adore thee,
God of glory, Lord of love;
Hearts unfold like flowers before Thee,
Praising Thee their sun above.
Melt the clouds of sin and sadness,
Drive the dark of doubt away;
Giver of immortal gladness,
Fill us with the light of day!

My wedding band is engraved with a reference I have to remove my glasses and squint to read now. Psalm 118:23,24– “This is the Lord’s doing; it is marvelous in our eyes.  This is the day that the LORD has made; let us rejoice and be glad in it.”  We knew it then.  We know it now.  Our relationship is His conniving.  Its continuity is by His grace. And we can only marvel at His doings all along the way–Six children and one grandson—love that continues to grow between us– He has made us rich.

These many years later, our anniversary celebration still gets squeezed into this busy but festive time of year.  The sun is shining for us today.  We will have a drive and maybe a kiss or two, and we will relish the joy that is ours in each other and in the Lord that has bonded and kept us all these years for His glory. 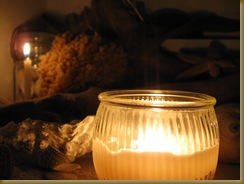 Out for a walk the other day I passed a man putting up his Christmas lights and in an effort to be friendly I called out “Yea for lights!” As I powered on up the hill I thought Yes! that’s exactly what I mean. Not only do I love seeing all the lights at this time of year, but I am particularly grateful this week for one particular light I found in a dark place.

I’ve been itching to get into some serious reading, stuff you have to chew on to digest. I thought this would be much more enjoyable and profitable (and likely to happen!)  with a group, so I got to looking for possibilities… Where I ended up was an online book discussion forum that was not exactly what I had in mind to begin with. I was thinking Christian authors, or at least coming at good literature from a Christian worldview… Where I landed was a club whose most prominent members are pretty staunch and intellectually oriented atheists and whose preferred books are by leading atheists. It wasn’t where I intended to go and yet, I had a sense of being called to it somehow, called to be a ‘light’.

I suppose I don’t think much about being a light most of the time. How significant is a candle in a lighted room?  My little light sits under its bushel basket, here in its cozy little home…or hangs out with other flickering lights.  Nothing dramatic about that.  But take a lone candle to a dark room and ahhhh…It stands out.

Anyway, so I found myself at this forum. I looked around, listened in on conversations, and began to interact.  I was warmly welcomed despite my enthusiastic recommendation of a scholarly book by a religious writer….  Responses  were courteous, but increasingly came to have a sharp edge as anything remotely connected to truth claims based on the Word of God arose. Now mind you, I was at this point only attempting to bring a balancing perspective to conversations they had started.  But balance is not the point.  Being able to find truth by ‘evidence’ with reason alone is.  Things got hot when I made mention of the fear of the Lord being the beginning of wisdom. But do you know what I found?  Just as the conversation was getting charged beyond reason another light showed up, and with wise and carefully chosen words defended and expanded on the truth I had only touched on.  Bless him!  I can’t tell you what a relief it was to find another believer in this place of darkened intellect.

A candle that’s been overlooked all summer long becomes a precious commodity when winter days get long and cheerless.  It’s a welcome presence in a dark place, and easy to spot!  I had in fact spotted this faithful flame early on in reading through some threads of conversation.  His were the consistently wise and tactful responses, though not above wry humor. This is no easy place to show “gentleness and respect” as you “give an answer for the hope that is in you”. (I Pet.3:15)  It’s easier to respond ‘in like kind’ than to ‘overcome evil with good’.   I was challenged! I’m not used to being told I’m ‘flat our wrong’ or that I believe ‘silly things’ without a shred of evidence… and obviously have little ability to think critically.  [I don’t want to represent all these skeptics as rude and insulting.  They have been, for the most part, quite respectful even when completely disagreeing.  I do get the sense that they are being intentionally careful in conversations with me, not being yet sure if I can be ‘won’ to their point of view.  They have dropped this reserve with the man I call “Mr. Pilgrim”. (I call him this  because I don’t know his real name, and because he recommended we read Pilgrim’s Progress!)] But this man has been at it for years discussing and defending his faith with the same core of skeptics. He’s committed to being a light and wrote me a private note not to be discouraged but to keep on, hoping eventually to increase the candlepower (my words) here.  He says Christians come by this forum every so often but are always chased away. He’s chosen to stay in hopes of winning someone.  He considers these guys friends assuring me their bark is worse than their bite in many cases. He says he’s learned to ignore their insults except when it comes to slandering Jesus.  His heart is evident in his words.  He shines.

I want to learn to shine like that and am so grateful for his example.  I’ve been reading and re-reading my instruction manual:

“Walk in wisdom toward outsiders, making the best use of the time.  Let your speech always be gracious, seasoned with salt, so that you may know how you ought to answer each person.” (Col.4: 5,6)

That’s Paul talking, but do you know what he says just before that?  Here’s where you come in:

“Continue steadfastly in prayer, being watchful in it with thanksgiving.  At the same time, pray also for us, that God may open to us a door for the word, to declare the mystery of Christ…that I may make it clear, which is how I ought to speak.”(v.2-4)

Not only are we are all lights in our respective places but we can brighten each others’ flames as we pray for one another. I love that!.

So as you’re digging out those dusty candles to brighten the season, give thanks for every opportunity to shine and say a prayer for all the ‘candles’ you know that are lending their light to our world.

His light has shone in our hearts “to give the light of the knowledge of the glory of God in the face of Jesus Christ.” (2 Cor.4:6)