I was out in the back yard just days after my last post and realized I’d been mistaken to think there were no bears out yet.  The tell-tale droppings confirmed it.  This also confirmed in my mind the need to clarify and expand on responses to ‘bears’ and when it really is OK to bark, even if it disturbs someone’s sweet repose.

For though I still maintain that the motive must be love and a genuine desire to build up and/or restore a brother, there are times when a friendly tail wag and an eager grin are not a sufficient response.  Erroneous doctrine can cause untold harm both inside and outside the church. Paul foresaw this happening when he warned the Ephesian elders: “I know that after my departure fierce wolves will come in among you…and from among your own selves will arise men speaking twisted things, to draw away the disciples after them. Therefore be alert, remembering (the three years of Paul’s ministry among them).” Eph.20:29-31


I’ve had to consider this issue this week because my online forum friends have dredged up the latest hot topic in Christendom—a book receiving lots of negative press by solid evangelicals—and they’re feeling pretty good about the author; he cuts them a break as far as hell is concerned and in their words: “We can attack the crazy or hateful ideas of fundamentalists all we want, but it doesn’t do any good. The evangelical set likes it and only grows stronger from it. That’s why pastor _________ should be praised for speaking out to his own peers about the toxic doctrine of damnation of unbelievers.” The world is looking on at our arguments among ourselves, but does this mean we should tone them down?  My response on this forum was something to the effect that: Pastor X is not doing any of us a favor with his watering down of Hell.  If you were dying of cancer would a doctor be doing you a favor to deny that it existed and would kill you left untreated?


So what is our response supposed to be to doctrinal error that rears its ‘bear-ish’ head in the church? Or to a brother that has wandered from the truth and embraced a false gospel?

I’ve been looking at the various passages in which Paul refers to false teachers and how to deal with them. Sometimes, avoidance is enough, as in his final instructions to the church in Rome: “I appeal to you, brothers, to watch out for those who cause divisions and create obstacles contrary to the doctrine that you have been taught. Avoid them. For such persons do not serve our Lord Christ, but their own appetites, and by smooth talk and flattery they deceive the hearts of the naïve…I want you to be wise as to what is good and innocent as to what is evil.” (Rom.16:17-19)


I hear this smooth talk in the writings of some currently popular ‘emergent’ leaders.  I feel the appeal of it—this softening of some of the ‘harsh’ doctrines about hell and judgment.  Surely a loving God wouldn’t do this or that.  This casting off, and even mocking, of key doctrines embraced by orthodox Christianity for thousands of years—it’s bold and brave and enticing in its way, and flattering, ear-tickling and clearly steeped in human reasoning at the expense of God’s definitive Word.


Is it enough to merely avoid interacting?  How do we speak out without being labeled ‘judgmental’?
Kevin DeYoung, a pastor who has written some excellent blogs evaluating current books has this to say in defense of speaking out in light of false doctrine:

It is possible that I (like other critics) am mean-spirited, nasty, and cruel. But voicing
strong disagreement does not automatically make me any of these. Judgmentalism is not the same as making judgments. The same Jesus who said “do not judge” in Matthew 7:1 calls his opponents dogs and pigs in Matthew 7:6. Paul pronounces an anathema on those who preach a false gospel (Gal. 1:8). Disagreement among professing Christians is not a plague on the church. In fact, it is sometimes necessary. The whole Bible is full of evaluation and encourages the faithful to be discerning and make their own evaluations. What’s tricky is that some fights are stupid, and some judgments are unfair and judgmental. But this must be proven, not assumed.

Incidentally, I most appreciated this pastor’s critical reviews because they were not personal attacks, not mean-spirited, nasty, or cruel, but objective and thorough critiques based on actual content compared to Scripture.  And this is where I think we have to focus when new ideas come circling looking for a place to land.  We have to be students of the Word, and guard against letting controversy ‘boil everything down to a conflict of personalities. This is the way the world understands disagreement. This is how the world sells controversy. It’s always politician versus politician or pastor versus pastor. But sometimes the disagreement is less about the men (or women) involved and more about the truth.’ (DeYoung) These are the cases where we are warranted in speaking up with the truth.

In fact, one of the qualifications for being an elder in the church is that he ‘hold firm to the trustworthy word as taught, so that he may be able to give instruction in sound doctrine and also to rebuke those who contradict it.’ (Titus 1:9) Paul instructs Titus to rebuke sharply certain ‘insubordinate, empty talkers and deceivers’ that were said to be ‘upsetting whole families by teaching for shameful gain what they ought not to teach.’  The purpose of the rebuke? —‘that they may be sound in faith…’(Titus 1:9-13)


Rebuke clearly has its place but it is not the whole solution.  Repeatedly in Paul’s writings I see him urging believers to hang on to what they’d been taught and to be diligent students of the Word.  Better than a quarrel is a right handling of the Word—a patient teacher who “corrects his opponents with gentleness. God may perhaps grant them repentance leading to a knowledge of the truth, and they may come to their senses and escape from the snare of the devil, after being captured by him to do his will” Irreverent babble on the other hand is said to be like gangrene—spreading to lead people into even more ungodliness. (II Tim.2)  I like that positive focus of knowing, hanging onto and teaching the true Word of God.  It keeps the focus where we are less apt to fall into sin ourselves!

Paul was quite adamant about it in his instruction to pastor Timothy.  You can almost feel the fire in his voice! “I charge you in the presence of God and of Christ Jesus, who is to judge the living and the dead, and by his appearing and his kingdom:  preach the word; be ready in season and out of season; reprove, rebuke, and exhort, with complete patience and teaching.  For the time is coming when people will not endure sound  teaching, but having itching ears they will accumulate for themselves teachers to suit their own passions,  and will turn away from listening to the truth and wander off into myths.  As for you, always be sober-minded, endure suffering, do the work of an evangelist, fulfill your ministry.” (II Tim.4:1-5)  I like that.  Be about your business, your calling before God.  Know His Word and the counterfeit will be as obvious as a black eye.

There is one other aspect of confronting error and even evil that is not the first that comes to mind.  Not mine anyway.  I had a skirmish with someone’s over zealous watchdog recently and was just fuming at the irresponsibility of the particular homeowner.  I marched on my way following the incident with legs still trembling formulating a merciless response plan in my mind.  Someone was going to hear my complaint! Oh boy, oh boy!  This was just not right!  And about a half mile down the road there was a still small voice asking if I was sure this was what I wanted—to treat a neighbor as an enemy and perhaps jeopardize a potential relationship.  But more than that, was this a way of letting my light shine?  This intolerance of a freak incident.  Is this how I would like to be treated… What of overcoming evil with good?  Ugghh.  I was jumping at the opportunity for a little vengeance as though I had never received grace when my dog was loose and not appreciated…

Overcome evil with good.  This too is our calling in the face of times where truth is increasingly hard to find lived out.  We are the salt of the world.  We are lights set on our little hills.   If  ‘by their fruits ye shall know them’ were spoken of me, what knowledge would people gain of Christ by what my life reflects?  George MacDonald went so far as to say: “To love righteousness is to make it grow, not avenge it.”  What are we pre-occupied with?

These sad lines were directed my way this week:
“I find it interesting that most Christians appear to want all nonbelievers to go to hell… they are so caught up in being right that even the thought of the rest of us being admitted to their special club without paying admission is offensive…” Is this really Fred’s experience of Christ-followers?!  I am praying this week for Fred*, that genuine believers who know how to overcome evil with good will be planted in his path to reflect Jesus’ heart to him. 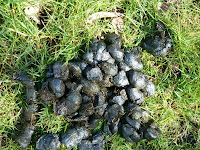 God grant us discernment as we keep an eye out for black droppings that ought not to be in our yards, and the wisdom to deal with them effectively.


–LS
———————
P.S.
One closing remark I must make is with regards to the wide-sweeping ‘emergent’ movement.  This is a term which has as many meanings as adherents I suppose.  And it is a label too that has been misapplied in some cases by over zealous watchdogs.  I know about these in real life, i.e. the literal kind.  In the span of a week Louie and I have had a run-in with not only the one mentioned above but with a grand St. Bernard who felt his area needed defending, even though we were well on our way up the street. He came barreling out to overtake us, sure there was a threat to his household I suppose. Talk about trembling legs!!  My point being that yes, we do need to guard the deposit of truth we’ve been given in the Gospel, to protect the family of God from heresy.  But let us be thorough students, careful not to black-list solid Bible teachers without clear evidence of error, solely based on random associations or quotes removed from their contexts.  I have seen this lately and it dismays me.

One thought on “When there really is a bear!”