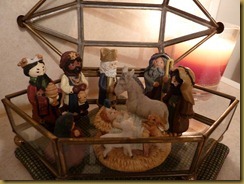 The music, the light, the glory of the Christmas season—I love it! Snatches of lyrics trot through my mind in endless succession like that illusive horse pulling the ‘one-horse open sleigh’ –a song that threatens to undue me if I hear it one more time!! I’ve never taken such a sleigh ride and I suspect I would be freezing and opt to stay home and have hot chocolate or perhaps linger under the mistletoe…while the chestnuts roast on our open fire. Ha! that’s another set of lyrics I’ve had more than enough of for a whole year! But while ‘Silver Bells’ and ‘Jingle Bell Rock’ and such modern ‘classics’ vie for airtime, it’s the old ones that hold the glory of the Season.

They tell the story of what happens when God appears on the human landscape— to ”certain poor shepherds in fields as they lay”– when a long dark night is punctuated by stunning lights and angels and an earth-shattering birth announcement!  The glory of the Lord shone around them and their world would never be the same.  They hightailed it to Bethlehem to find this living, breathing, swaddled-in-cloth Savior and spread the word.  “Veiled in flesh, the God-head see.  Hail the Incarnate Deity.  Pleased as man with men to dwell, Jesus, our Emmanuel!”

If the folks asleep in Bethlehem that night ‘sprang from their beds to see what was the matter’ the news went way beyond a reindeer-drawn sleigh driven by Saint Nick out doing last-minute parcel deliveries.

“Arise, shine; for thy light is come, and the glory of the LORD is risen upon thee!!!”  Age-old prophecies were being fulfilled this night on their very doorsteps, if only they had ears to hear the news. “For, behold, the darkness shall cover the earth, and gross darkness the people: but the LORD shall arise upon thee, and his glory shall be seen  upon thee.” (Is.60:1,2)

But ‘how silently, how silently the wondrous gift is given…’ (O Little Town of Bethlehem)  How many local residents even knew what was happening that night?  It would be years before Jesus’ glory would begin to be unveiled…and His neighbors were the ones most likely not to recognize it.  And as for the rest of the world?  Only a few ‘wisemen came from country far; to seek for a king was their intent, and to follow the star wherever it went’(The First Noel)….It would be years yet before the significance of this night’s glory would be flung to the far reaches of the world.

And who would believe it?  Isaiah predicted the whole situation: “Who has believed our report? And to whom has the arm of the LORD been revealed? For He shall grow up before Him as a tender plant, And as a root out of dry ground. He has no form or comeliness; And when we see Him, There is no beauty that we should desire Him.” (Is.53)

Here, the glory of the Lord was all wrapped up in swaddling clothes…then in a carpenter’s apparel, then in the garb of an itinerate teacher…then hanging naked on a wooden cross…who would see it?  It was announced with great fanfare and drama in the beginning: “GLO………RI-A   IN EXCELSIS DEO…” by ‘angels from the realms of glory, wing[ing] their flight o’er all the earth’ [Angels from the Realms of Glory] but what of the glory now?  ”how silently, how silently the wondrous gift is given.  So God imparts to human hearts the blessings of His heaven, no ear may hear his coming, but in this world of sin, where meek souls will receive Him still, the dear Christ enters in” [O Little Town of Bethlehem]…inviting all who would follow:

“I am the light of the world: he that followeth me shall not walk in darkness, but shall have the light of life.” (Jn.8:12)

This God-man came into the world with his glory largely veiled, or I suppose we’d all be dead.  After all, the shepherds were left quaking and ‘sore afraid’  at the mere announcement of his coming when ‘the glory of the Lord shone around them’. (Lk.2)  No, the glory of Jesus was of a more subtle sort.  John described it this way: ”And the Word became flesh and dwelt among us, and we have seen his glory, glory as of the only Son from the Father, full of grace and truth.” Jn.1:14  Before His coming there was the Law, impossible to keep, bringing condemnation, showing the gulf that existed between man and God.  But with Jesus, there came grace, God’s unlikely, untimely, unbidden favor—peace on earth and good-will toward man.  A perfect melding of grace and truth was the glory Jesus shone with ‘and from his fullness we have all received, grace upon grace.’ (Jn.1:16)

And every Christmas we again string lights and light candles and listen to music that celebrates the glorious reality that “God with man is now residing.”  Where is He?  Lo, the star over Bethlehem has given way to a Body of Christ-followers who ‘shine like stars in the universe.’  It is in the likes of you and me ‘in the midst of a crooked and twisted generation’ (Phil..2:15) that His glory is now seen, in these earthen vessels shining with a glory not their own, revealing the Light of the World!  And as we shine, wise men are drawn to come and see this great King who has been born to us–the Light of the World and the Glory we long to see.

And we all, with unveiled face, beholding the glory of the Lord, are being transformed into the same image from one degree of glory to another. For this comes from the Lord who is the Spirit. 2Cor.3:18

May His glory shine in and around you this Christmas season!

—and some final thoughts on this great glory—

“…the god of this world has blinded the minds of the unbelievers, to keep them from seeing the light of the gospel of the glory of Christ, who is the image of God.” 2Cor4:4