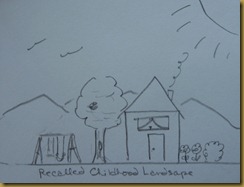 What would it be like to live for a whole year with this word, “SEE” in focus? Would I learn to see more clearly, more fully, more like God sees?

I say I want to learn to draw more and better than I do. They say it’s really a matter of learning to see, to perceive things as they really look, not as you suppose they should be. As children we draw squares topped with triangles, add chimneys and call them houses. We plunk in a little rectangle and perhaps a wee circle where the doorknob should be. We add some squares for windows and voila we have a replica of our home… But as adults we begin to see there’s more to the drawing of a realistic house. But how do we do it? We learn to see the lines and angles that are really there.  Only then can we transfer them to paper… I want to learn to really see and copy what is there. This is one of my intentions in this New Year.

But there is more to seeing than being able to draw. Sunday’s sermon was taken from John 1. John the Baptist had done his job. His own disciples were fascinated with this God-man Jesus that John had pointed out to them. “Behold”, he had said…That’s the King’s English imperative for: “SEE, look, take note, observe, pay attention”. And they did. Before long, John’s disciples were becoming Jesus’ disciples. They just literally started following Jesus till He turned to ask them what they wanted. They wanted to stay with Him wherever that was. Jesus invited: COME AND SEE. This was just the beginning for these uneducated fellows. They were learning to see who this really was, and they would never be the same.

I want to learn to see like that too, to see the real Jesus, to see where He stays, to watch what He’s doing, to walk with Him and follow His directives till I am turned around and made into all He wants me to be. Then others will see Jesus when they look at what’s happening in my life, for it will be His doing! That’s the way it’s supposed to be anyway. Remember what was said about Peter and John?

“When they saw the courage of Peter and John and realized that they were unschooled, ordinary men, they were astonished and they took note that these men had been with Jesus.” Acts 4:13

God expects others to see our good works and glorify Him! (Mt.5:16) For He’s the Source of all goodness. (Lk.18:19) A good piece of artwork draws attention to its creator. Do the details of my days point to Jesus? Are they covered with His fingerprints?

Of course these first followers were so excited about what they saw when they met Jesus that right away they began pulling others into the picture. Andrew dragged his impetuous brother Peter to Jesus to prove to Him what a ‘find’ he’d made–The Messiah had come!

Philip told incredulous Nathaniel he’d just have to “Come and see” for himself. And Nathaniel was convinced, for to his wonderment Jesus told him that He’d seen him there under the fig tree. Had Nathaniel been deep in thought there–waiting and wondering when the Messiah would come and how he’d recognize him? Perhaps. Jesus pronounced him to be without guile (precisely what the religious leaders in Israel were full of, cf.Mk.14:1). There was no deceit or trickery in Nathaniel, and right away he believed, “Rabbi, thou art the Son of God; thou art the King of Israel.”Jn.1:49 We might have thought Nathaniel gullible. Jesus was delighted with his faith and assured him he would see far greater things. The eye of faith sees what others miss. I want to see like that.

I woke this morning with an old song in my head:

Open my eyes, that I may see
Glimpses of truth Thou hast for me;
Place in my hands the wonderful key
That shall unclasp and set me free.

Yes, that’s what I want to see in this New Year, truths I’ve missed and the lies I’ve believed that keep me bound up. I want to see how God sees and walk in His perfect will for my days. When John came baptizing, spurring people to repentance, he was fulfilling God’s calling for his life and in so doing he ‘made manifest’ the Messiah. This was the point of his ministry, (Jn.1:31) not to be somebody but to devote his life to making Somebody else known!

It started with recognizing Jesus: “The next day John saw Jesus coming toward him”. Only then was  he able to point Him out to others: “Behold (lit: “See”), the Lamb of God who takes away the sin of the world!.” Jn.1:29

May we have our eyes open this year to see Jesus nearby so we can point Him out to others. And may the art of our lives show others what He’s really like as we trace His design in the way we live our days.

“For the law was given by Moses, but grace and truth came by Jesus Christ.” –John1:16