Now there’s an expression I haven’t heard in a long while!  Apparently it dates back to the 1700’s.  And though it alludes to the goodness and grace of God it is used commonly as an expression of surprise, dismay or alarm.

I would like to reclaim it as an expression of actual appreciation for God’s grace—GOOD GRACIOUS!—He has been so gracious to one so lacking in grace.  I see this from fresh vantage points every passing year.  I stumbled upon an old post just now, written just over a year ago.  I was wrestling with the damning sense of ‘falling short’, and grasping for freedom to live out God’s design for me without this stifling condemnation.  This seems to be a recurring theme for me. But God keeps on pursuing, keeps on wooing me to rest in grace and to relax in the freedom He has purchased for me.

He sees the mode I live from.  Though an heir to Christ’s righteousness I act as though my life depended on my own goodness?   I live as though avoiding mistakes and messes and sins and ‘scenes’ were the main thing. I  readily confine myself to the ‘tried and true’, things I think I can competently manage.  Or in lieu of that, to at least keeping up appearances, which demands limiting opportunities to fail.

It’s a grace-less and confining way to live.  And I’m sick of living in a cage!  God is too good and too GRACIOUS and life is too short for this. I want to fly!

The way out of this cage is more elusive.  It’s one thing to evaluate the cage you’re in and to see how you got there, but quite another to get the latch undone and fly free!  Pride has wired it tightly shut.  My life may not depend on limiting myself to known areas of competence, but my pride certainly does!!  I think it must be part of the human condition to want to be good enough to merit something!   But in this place how shall we ever know life-transforming grace?

There is no parable that displays this problem more clearly than the story of the King settling accounts with his indebted servants. (Mt.18:23ff) Before him stood a servant that owed him more money than could be earned in a thousand lifetimes as a common laborer!

The fellow is about to be thrown in prison for life, so what does he do? You’d think he’d throw himself at the King’s feet and plead for mercy, right?  But no, he has his pride.  Instead he asks for time–for the king’s patience while he pays back his debt. Patience?  Is that really all he needed?  Does he really think he owes so little that he can make it up in a few short years? Never mind, the king took pity on this conceited servant, released him from prison and forgave his debt. It was sheer grace.

But was the debtor grateful? No, he was too proud to accept handouts.  This was no time for gratitude.  All he could think of was the fellow who owed him money. It was just a day’s wages but oh, how he throttled him, demanding that what was owed be paid back.  There was no place for grace. This servant of the king needed cash badly. He was intent on paying back the king.  This might be admirable in some other context but in light of the horrific debt he owed, and the King’s life-sparing offer, it was an insult to His gracious King. And because he had failed to comprehend the magnitude of what he had been forgiven, this servant was unable to extend grace to others.

He ended up back in prison, a permanent debtor to the king, only because he could not admit his own bankruptcy and welcome the King’s gracious offer:

“You have nothing. I have everything.
Here, I gift you your freedom from the debt you owe.”

I need this parable. It reminds me of the immense grace of God in which I stand. Grace which cost Jesus His life. Surely I have been forgiven much. But only to the extent that it sinks into those self-righteous sinkholes in my soul will it be truly transformative in my day-to-day encounters with real people.  And I am brought again to repentance—the starting place for grace to work its wonders and to free us from our self-serving confines.

We have been set free.

Freed from–sin’s domination,  the Law’s condemnation and our pre-occupation with falling short.

Freed to–live a life of love, led by the Spirit and governed by faith, not rules.

And there really is no condemnation for those who are in Christ Jesus—though we bungle, though we stumble, though we fail to reach our own ideals…If the Son shall make you free, you shall be free indeed!

Good gracious!  That’s a  liberating reality to fly with! 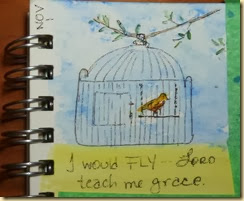 “…for it is good for the heart to be strengthened by grace…” Heb13:9

“For you were called to freedom, brothers.  Only do not use your freedom as an opportunity for the flesh, but through love serve one another.” Gal.5:13

“For through the Spirit, by faith, we eagerly wait for the hope of righteousness. For in Christ Jesus….only faith working through love [counts].” Gal.5:6

Who shall bring any charge against those whom God has chosen? It is God who justifies.  Who is he that condemns? Rom. 8:33,34