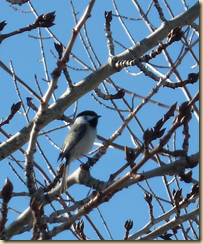 I came home Monday from an early morning birding excursion with a fresh awareness of bird songs and calls and of my own ignorance of them!  Standing and listening motionless to birdsong for 15 minutes at a time is an exercise I hadn’t tried before.  Apparently birds sing most in the early morning.  They have songs and calls which are generally unique to their species.  It is primarily the males which sing the songs as a means of attracting a mate and establishing their territory.  Calls are simpler and less musical and used by both male and female to keep in touch, to sound a warning, to beg, and to intimidate enemies… I am learning these things.

But I must admit this first outing was a little like a blind man seeing for the first time.  What’s that? was my most pressing wonder. Only I couldn’t ask for fear of disturbing the birdsong. I can identify  the sounds of so few birds that by the end of that first outing I must admit I had turned to the more familiar and was snapping pictures of flowers and reading trailside plant identification signs.  I am not a good auditory learner.

We were listening specifically for just a handful of species.  But birdsong was everywhere.  In contrast to my ignorance, the birding expert I accompanied had jotted down the names of at least half a dozen species at each stop.  We had not seen them necessarily, but her ears were quick to hear them.  Her job was to give an account of the birds in the area under study.  And for this job it’s the hearing that really matters. If you’ve learned to listen even the secretive unseen types can be counted.

Well, so that was all very interesting and I hope to be invited out again and to hone my listening skills.  But fresh on the heels of that experience, with bird songs and calls on my mind, I came home and  opened to the day’s Bible reading, the story of Bartimaeus, the blind beggar in Mark 10. He had no choice but to be an auditory learner!

There he was sitting at the dusty roadside, listening,  hoping for the pity of passers-by, hoping they could spare a shekel…His ears were no doubt attuned to the sounds of sandal traffic..Suddenly there was a great crowd approaching.  “What’s going on?” It wasn’t a feast day, why all the traffic?  He listened acutely to the snatches of conversation around him. “It’s Jesus, from Nazareth!” somebody hollered as feet raced by to meet the approaching crowd.  Hope surged in his heart.  He had heard the stories of this man.  He taught and acted with authority unlike any teacher before him.  Demons obeyed him. He made the sick well, the deaf to hear and way up North a blind man had regained his sight.  Had Bartimaeus heard this story too?  Perhaps.

One thing he had heard somewhere, somehow, was that this man Jesus claimed to be the Messiah, ‘the Son of David’.  He believed it.  And over the noise and bustle of the approaching crowd he began to cry out at the top of his lungs:  “Jesus, Son of David, have mercy on me.”

What more could he hope for than mercy?  He was despised, a useless tramp, dependent on the alms-giving of the pitying public.  in fact his cries embarrassed them, annoyed them.  “Shut up!” they said, as if to put him in his place.  He cried out all the louder, “Son of David, have mercy on me!” hoping somehow to be heard above the clamor of the crowd.  If only Jesus could hear him…

I have a hunch Jesus would have made a stellar birding companion.  He wouldn’t have missed a ‘cheep’ or a ‘tut’.  After all it was He that composed the songs that come chortling in the early morning,  He that designed language and gave the birds their calls, to each kind its own.  Then He walked our dusty trails and noticed little fallen sparrows and circling vultures.  He knew the habits of a barnyard hen gathering its chicks and heard the early-riser rooster. He saw the seeming innocence of cooing doves.  None of these escaped His notice.  Nor did Bartimaeus.  Obscured and nearly drowned out  by the crowd, his voice still came to Jesus’ ear.  Since Jesus could not make his way to the man for the press of the crowd He called to him to come.  And the next thing beggar Bart knew, people were no longer telling him to be quiet.  In fact they were saying the unbelievable:

“Take heart. Get up; he is calling you!!!”  They probably couldn’t believe it either.  But Jesus had stopped in his tracks and was waiting for this scruffy blind beggar to feel his way through the crowd to Him.  He didn’t have to wait long.  Bart leaped up flinging off his cloak and the crowd parted and drew him forward till he was standing right in front of Jesus.

The next words he heard were: “What do you want me to do for you?” The Messiah was offering to serve a beggar–calling him to Himself, extending the very mercy the man had hoped for.  This is our Jesus.

Just prior to this incident, His own disciples, James and John had come with their mom to ask Him a big favor.  And He had said to them also:  “What do you want me to do for you?”  They had asked to share His glory in the coming Kingdom, to sit one on his right hand and one on His left.  Their request was denied, not being His prerogative to grant.  He told them they did not know what they were asking! When the rest of the disciples heard their presumptuous request they were indignant.  A teaching moment followed in which Jesus told them clearly that servanthood was to be the mark of His disciples.  “…and whoever would be great among you must be your servant, and whoever would be first among you must be slave of all.” Mk.10:43,44

Jesus was no exception: “For even the Son of Man came not to be served but to serve, and to give his life as a ransom for many,” he had gone on to say. (Mk.10:45)  Next thing you know, they are on the outskirts of Jericho and a blind beggar is crying out to be heard.  What followed was an object lesson for Jesus’ disciples.  He turned from the fawning crowds who would soon be hailing him their King and offered His services to a helpless beggar:

What do you want me to do for you?

Bartimaeus respectfully asks for his vision to be restored.  And Jesus, pleased by his faith, and his humility (Have you noticed how the two go together?)  grants him his request saying, “Go your way; your faith has made you well.” But Bartimaeus doesn’t go.  He leaves his roadside rags and follows Jesus on His way to Jerusalem. This would be the final week of Jesus’ earthly ministry in which He would demonstrate ultimate servanthood, laying down His life ‘as a ransom for many’.  Bartimaeus would be a part of that week because Jesus had heard his cry for mercy and called him to Himself.

And still He calls.  It doesn’t take a birder’s trained ear to hear.  We do not need a course in listening, or a book, or an advisor, anymore than a bird needs an Audubon guide book to identify his own species calling.  God’s voice is the one we are wired to hear; we are made in His image.  Adam heard it in the Garden, God in the cool of the day coming to walk with him, calling him by name: “Adam, where are you?”  He cringed. He had sinned.  He was in desperate need of mercy, like the blind beggar on the roadside. We too are  designed for fellowship with God.  We hide like secretive marsh birds because sin has broken that fellowship, marred that image.  But Jesus is near, calling, listening for our cry for mercy.  He calls us to come to Him.  He will do the rest.  He has come to seek and to save the lost, to open our eyes to the hope of our calling, to free us to follow Him…

Isn’t this the heart of the Gospel—this news that God has made a way for man to come near to a Holy God?  Whether we find ourselves in the place of Bartimaeus, the blind man crying for mercy, or in the place of the people in the crowd who brought Bart the good news: “Take heart, get up, He’s calling you!” we have a calling from God.

For those of us who have long since had our eyes opened and have answered the call to follow Jesus, this story reminds us that Jesus hears our heart’s cries still.  Though we have left behind our rags to follow Him, He doesn’t expect that we will cease to need Him for even a moment.  Still He calls us to take heart and clamber out of the ruts we fall in from time to time.  Still He calls us to relationship with Himself when we stray.  Still He offers to serve us:  “What can I do for you?” and He knows when to say “Yes” to our requests and, mercifully, when to deny them because we don’t really know what we are asking.

We are the ‘called out’ ones who have gone from being roadside beggars ‘having no hope and without God in the world’ to being ‘brought near by the blood of Christ’, reconciled to God with access in the Spirit to the Father, ‘no longer strangers and aliens but fellow citizens with the saints and members of the household of God.’  Ours is now the song of the redeemed.  And like so many songbirds who cannot help but sing, we are wired to sing His praise with our very lives.

Let my lifesong sing to You!

‘…having the eyes of your hearts enlightened that you may know what is the hope to which he has called you’ (Eph.1:18)

But you are a chosen race, a royal priesthood, a holy nation, a people for his own possession, that you may proclaim the excellencies of him who called you out of darkness into his marvelous light. Once you were not a people, but now you are God’s people; once you had not received mercy, but now you have received mercy.  I Pet.2:9,10

Now to him who is able to do far more abundantly than all that we ask or think, according to the power at work within us,  to him be glory in the church and in Christ Jesus throughout all generations, forever and ever. Amen. Eph.3:20,21

[This old hymn came to mind as I was writing today.  It seems so fitting I pass it on…—LS]

Jesus calls us o’er the tumult

1 Jesus calls us: o’er the tumult
of our life’s wild, restless sea;
day by day his sweet voice soundeth
saying, “Christian, follow me.”

2 Jesus calls us from the worship
of the vain world’s golden store,
from each idol that would keep us,
saying, “Christian, love me more.”

3 In our joys and in our sorrows,
days of toil and hours of ease,
still he calls, in cares and pleasures,
“Christian, love me more than these.”

4 Jesus calls us: by thy mercies,
Savior, may we hear thy call,
give our hearts to thy obedience,
serve and love thee best of all.

One thought on “He’s Calling You!”