Have you been there?

John the Baptist was.  He’d been faithful, truthful, and God-honoring.  And there he sat in a Roman prison awaiting the verdict…

Naomi was.  She’d left her home-country with her husband and sons to wait out the famine.  Her sons had married but had no children and now both husband and sons were dead.  And she found herself aged and all but alone in a foreign culture.

Samson’s parents had raised him as best they could.  They’d followed God’s directives. Perhaps they’d spoiled him just a  bit but… now he’d been captured by the enemy, blinded and put to slave labor like a common ox.  And then, he was dead—a hero of sorts, it’s true, but dead nonetheless…

Job saw the worst of it.  Disaster upon disaster. His children were all tragically killed in a single day.  His wife even failed him.  This is not how a life of faith should end, is it?

Sarah and her husband waited long years for the promised heir. Every birthday a bitter reminder that they were infertile…

A childhood friend lies in hospice care soon to breathe his last leaving a young daughter who has already lost her mother to cancer.

Sweet kids grow up to be rebellious teens wreaking havoc on their families.

Christians are brutally slaughtered for no better reason than their faith.

These would all be tragedies if it weren’t for the surprise endings God writes into their scripts.  Even death is not final.  And with God our bitter ends are only beginnings, opportunities for His eternal power to shine.

Things seldom  ‘turn out’ the way we’d imagined they would.  It doesn’t seem ‘right’…But we aren’t given the last word.  Our sense of what’s right is surely flawed.  Only eternity will show the perspective we’ve missed.  Our stories are not about us.  God is at work to showcase through us His manifold wisdom, to the rulers and authorities in the heavenly realms (see: Eph.3:10)We are creatures locked in time while God is eternal, working out His eternal purposes in these fragile bodies and their earth-bound relationships.

John the Baptist is beheaded but his testimony lives on to the glory of God: “Verily, I say unto you, among them that are born of women there hath not risen a greater than John the Baptist: notwithstanding he that is least in the kingdom of heaven is greater than he.” Mt.11:11

Naomi introduces a Moabite to the One true God and in so doing brings her into the family line of Jesus.

Samson delivers Israel from oppression through his death and is written up in the Hall of Faith as one who pleased God, leaving a legacy of hope to those of us who fail to be perfect parents to perfect kids.

Job confirmed  God’s bragging rights in the heavenly realms.  “Have you seen my servant Job…” and we all know the surprise ending of his life even on this side of heaven: “So the LORD blessed the latter end of Job more than his beginning…”Job 42:12

Sarah was given the gift of laughter with the coming of a son in her old-age. It was the last thing she’d expected.

These are just glimpses we are given of God’s surprising ways of doing things.  Again and again He interjects hope and purpose into the worst case scenarios of life.  He takes our would-be bitterness and transforms it into better-ness.

Wherever you’re at in His story, God is not finished yet.  Who knows what He will yet do with the raw materials of our lives?!  This is no time to give up hope.  The best is yet to come! 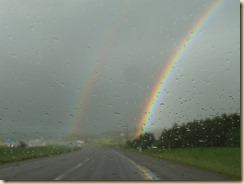 Our best hopes are yet future.  We, like our Christian kin of old, look for a city whose designer and maker is God (Heb.11:10)  This earth is not our forever home.  Looking back at the way things might have been will not do.  (Lot’s wife learned the hard way).  God beckons us to press on for the prize awarded to those who trust Him with all the ups and downs of life.  He can be trusted to do the unexpected.

“Yet God my King is from of old, working salvation in the midst of the earth.” Ps.74:12

For you have need of endurance, so that when you have done the will of God you may receive what is promised. Heb.10:36

For, “Yet a little while, and the coming one will come and will not delay;  but my righteous one shall live by faith, and if he shrinks back, my soul has no pleasure in him.”  But we are not of those who shrink back and are destroyed, but of those who have faith and preserve their souls. Heb.10:37-39 ESV

Now faith is the substance of things hoped for, the evidence of things not seen.  And what shall I more say? for the time would fail me to tell of Gideon, and of Barak, and Samson, and  Jephthae; David also, and Samuel, and  the prophets: Who through faith subdued kingdoms, wrought righteousness, obtained promises, stopped the mouths of lions, Quenched the violence of fire, escaped the edge of the sword, out of weakness were made strong, waxed valiant in fight, turned to flight the armies of the aliens.  Women received their dead raised to life again: and others were tortured, not accepting deliverance; that they might obtain a better resurrection:  And others had trial of cruel mockings and scourgings, yea, moreover of bonds and imprisonment: They were stoned, they were sawn asunder, were tempted, were slain with the sword: they wandered about in sheepskins and goatskins; being destitute, afflicted, tormented;  (Of whom the world was not worthy:) they wandered in deserts, and in mountains, and in dens and caves of the earth. And these all, having obtained a good report through faith, received not the promise. Heb.11:1, 32-39 KJV

Sing praises to the LORD, O you his saints, and give thanks to his holy name. For his anger is but for a moment, and his favor is for a lifetime. Weeping may tarry for the night, but joy comes with the morning. Ps.30:4,5 ESV

When the LORD restored the fortunes of Zion, we were like those who dream. Then our mouth was filled with laughter, and our tongue with shouts of joy; then they said among the nations, “The LORD has done great things for them.”  The LORD has done great things for us; we are glad. …  Those who sow in tears shall reap with shouts of joy! Ps.126:1-3, 5 ESV

Now to him who is able to do far more abundantly than all that we ask or think, according to the power at work within us,  to him be glory in the church and in Christ Jesus throughout all generations, forever and ever. Amen. Eph. 3:20-21

2 thoughts on “The God of Surprise Endings…”