I listen carefully to what God the LORD is saying, for he speaks peace to his people, his faithful ones.  But let them not return to their foolish ways—Serve only the LORD your God and fear him alone.  Obey his commands, listen to his voice, and cling to him.

Long ago God spoke many times and in many ways to our ancestors through the prophets.  But now in these final days, he has spoken to us through His Son— Come to me, all of you who are weary and carry heavy burdens, and I will give you rest…my yoke fits perfectly, and the burden I give you is light.

And we are God’s household, if we keep up our courage and remain confident in our hope in Christ.  That is why the Holy Spirit says, “Today you must listen to His voice. Don’t harden your hearts against Him as Israel did when they rebelled.”

For if we are faithful to the end, trusting God just as firmly as when we first believed, we will share in all that belongs to Christ…there is a special rest still waiting for the people of God. For all who enter into God’s rest will find rest from their labours, just as God rested after creating the world.

God speaks peace to His people. He offers an easy yoke.  He calls us to trust Him in everything and so to find rest for our souls.  Do I walk in this rest? Or am I driven by fears and insecurities to grasp for control of as many factors as I can so that I can secure my best life now?  These thoughts challenge me as I put myself in Jeremiah’s shoes.  I’ve been reading through his book at a snail’s pace lately and I find we have this in common–he too found great delight in God’s Words. 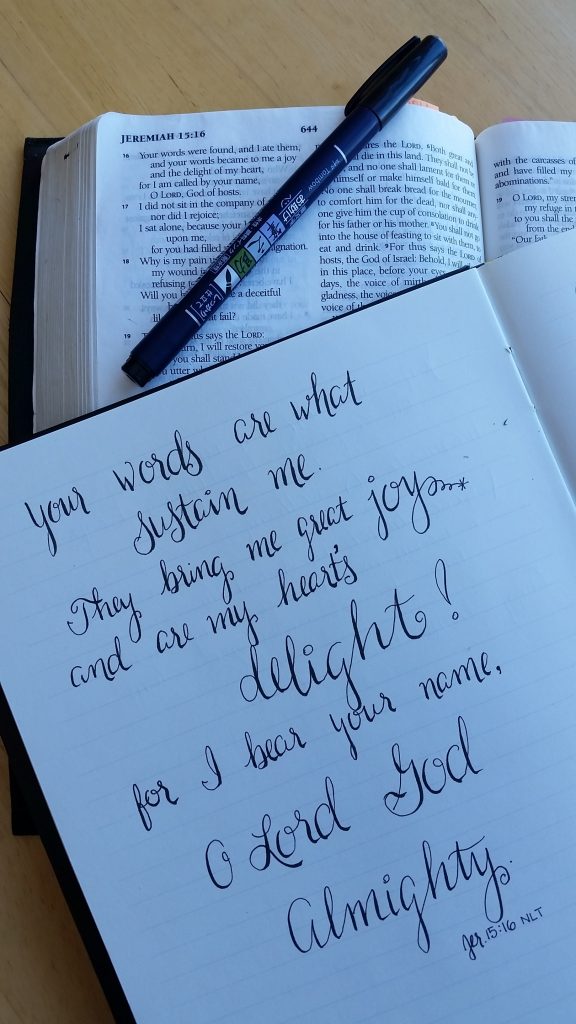 But I also see how much he suffered on account of these words!  His delight went beyond the comforting lines to a hard obedience.  He was called to repeat God’s message when noone wanted to hear it and this mission brought him to death’s door.  Chapter thirty-eight of his story finds him sunk in mud at the bottom of a cistern in the middle of a city about to be decimated by war, famine and disease. He knows this judgment to be coming because God has said so.  But there is nothing he can do to preserve his own life; he cannot flee the city or surrender to the Babylonians.  He must rest his own case with God. I see in him a soul rest I find enviable.

Two men walk into the story at this point, demonstrating for us the consequences of trusting or rejecting what God has said, even when we are terrified of what’s going to happen next.

Both hear Jeremiah’s message from God:

“This is what the LORD says: ‘Everyone who stays in Jerusalem will die from war, famine, or disease, but those who surrender to the Babylonians will live. Their reward will be life. They will live!’ Jer.38:2NLT

And both men are terrified at its prospects.  But each responds differently and this makes all the difference in what comes next for each of them.

King Zedekiah, on the one hand, calls a private meeting with Jeremiah to verify what the Lord has to say about his predicament.  He has been appointed king in Jerusalem by the Babylonian king, in exchange for his loyalty.  But he is loathe to surrender without a fight.  Surely God will not let His beloved Jerusalem be sacked by the wicked Babylonians?! Zedekiah listens carefully to God’s words via Jeremiah:

Then Jeremiah said to Zedekiah, “This is what the LORD God of Heaven’s Armies, the God of Israel, says: ‘If you surrender to the Babylonian officers, you and your family will live, and the city will not be burned down. But if you refuse to surrender, you will not escape! This city will be handed over to the Babylonians, and they will burn it to the ground.'” Jer.38:17-18

But his pride and his fear cause him to harden his heart against turning to the LORD and following His counsel.  He responds:

“But I am afraid to surrender, for the Babylonians may hand me over to the Judeans who have defected to them. And who knows what they will do to me!” Jer.38:19NLT

His own fears of ‘what if’ make him deaf to God’s promise of life.  He refuses to believe Jeremiah’s reassurance:

You won’t be handed over to them if you choose to obey the LORD.  Your life will be spared, and all will go well for you. Jer.38:20 NLT

Instead, by his own choice, all does NOT go well for him. His life concludes in cruel exile—his eyes gouged out after witnessing the murder of his own sons and nobles. In rejecting God’s Word Zedekiah forfeited the mercies of God extended to him. He trusted in his own stategies for well-being and reaped the results.

But among Zedekiah’s frightened palace officials there was a man who refused to act out of fear. When all the rest of the officials were intent on Jeremiah’s death, Ebed-melech stepped forward and pled for his life.  He personally saw to Jeremiah’s merciful rescue from the Pit of YUCHHK!  Despite his horror at the prospect of Babylon’s onslaught, he honored God’s Word by protecting His servant, risking the king’s wrath being turned on him.

And God sent him this personal message:

“I will do to this city everything I have threatened.  I will send disaster, not prosperity.  You will see its destruction, but I will rescue you from those you fear so much.  Because you trusted me, I will preserve your life and keep you safe.  I, the LORD, have spoken!”

I love that!  God saw Ebed-melech’s fear.  He also saw his brave rescue of Jeremiah.  And for his faithfulness God preserved his life when others were slaughtered.  He showed Himself to be the only King worth fearing, the King of Kings and Lord of Lords, in whose service we can confidently live all our days, resting our souls with Him.

Incidentally, do you know what happened to Jeremiah when Jerusalem was sacked and its occupants carried off into exile?  Special orders had been given by the King of Babylon to keep an eye out for Jeremiah and to protect his life.  When the Captain of the Gaurd found him chained with the other exiles he let him free and invited him to come along and be well cared for or to stay behind with the poor remnant in Judah, his choice!

“The whole land is before you–go wherever you like.”

David’s testimony could well have been his:

Gracious is the LORD, and righteous; our God is merciful.  The LORD preserves the simple; when I was brought low, he saved me.  Return, O my soul, to your rest; for the LORD has dealt bountifully with you. Ps.116:5-7ESV

Having delighted in God’s word and feared God alone, Jeremiah found rest for his soul in very difficult times.  He had learned the lesson of his predecessor:

“Do not call conspiracy all that this people calls conspiracy, and do not fear what they fear, nor be in dread. But the LORD of hosts, him you shall honor as holy. Let him be your fear, and let him be your dread. Is. 8:12-13 ESV

By God’s grace, I want this to be my testimony, the key to my strength and stability in tough times.  May my delight in God’s Word go beyond comfort to obedience even when fears threaten to dissuade me.  This is my hope and prayer.

For thus said the Lord GOD, the Holy One of Israel, “In returning and rest you shall be saved; in quietness and in trust shall be your strength.” But you were unwilling… Is.30:15 ESV

2 thoughts on “But I’m afraid to surrender!”