A raven alights in the tallest pine outside my window to survey the snowy landscape.  This descendant of Noah’s raven reminds me that the people of God have had long practice in waiting.  My wait for spring to banish winter’s white is nothing compared to what Noah’s wife must have felt cooped up in God’s zoo itching to put her feet on solid ground and start planting flowers! 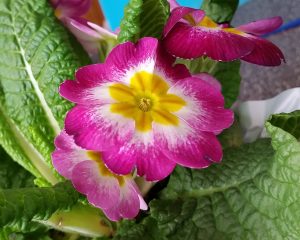 But I’m waiting for other things, less transient than spring’s blush.  I’m waiting for my Dad’s release from the prison his body has become.  I’m waiting for solutions to Mom’s lonely predicament of watching and wondering whatever she will do when he is gone…I’m waiting to see what God will do in a myriad of situations, in a world that grows increasingly hostile to our greatest hopes.  And in the waiting I am stepping forward to offer myself for God’s purposes, asking and trusting that my steps will be ordered aright.  Ultimately only Jesus can banish sin and death, and birth the faith and life we long to see.  Ultimately it is His Kingdom’s coming we await.

Even so, Come, Lord Jesus…

In the meantime we have the cycle of seasons in which to practice this waiting.

I heard a robin calling for a mate the other evening as we walked slowly back to the van following a cross-country ski workout on tracks now creaking beneath our weight with the thawing temperatures that erode their base.

A flutter of chickadees gossiped in the bushes outside the church door on Sunday.

And a four-some of dandelions was spotted beside the church building, meriting an announcement to the congregation lest anyone should miss the sight.

Yes, there are signs of spring’s coming. The wait will not be forever.  Even so, there will be an end to our other seasons of waiting.  Sickness, sadness and hopelessness will not have the final word.  Sin will give way to salvation, death to resurrection. In the meantime faith is our lifeline.

Peter’s second letter was written from the vantage point of one who knew his life on earth was nearly over (II Pet.1:14) He wrote to  encourage his fellow believers to hang on to their hope–that Jesus would come again and that it would be worth the wait!  He warned them not to get caught up in the arrogant lifestyles of those who rejected Christ’s Lordship to follow their own passions.   And he encouraged them to pay no attention to scoffers who taunted “Where is the promise of His coming?”  while claiming despite the evidence that “Everything has remained the same since the world was first created.” (II Pet.3:4)  Instead of preparing for judgment they pretended it had never come and would not come again.

But the day of the Lord will come as a thief, and then the heavens will pass away with a roar, and the heavenly bodies will be burned up and dissolved, and the earth and the works that are done on it will be exposed.

Since all these things are thus to be dissolved, what sort of people ought you to be in lives of holiness and godliness, waiting for and hastening the coming of the day of God, because of which the heavens will be set on fire and dissolved, and the heavenly bodies will melt as they burn!

But according to his promise we are waiting for new heavens and a new earth in which righteousness dwells.  Therefore, beloved, since you are waiting for these, be diligent to be found by him without spot or blemish, and at peace.  And count the patience of our Lord as salvation… II Pet.3:10-15 ESV

This brings a jolt of perspective to all my little waits, and braces me to keep the big picture in view.  It is faith that God is looking for, a God-confidence that doesn’t lose sight of His Kingdom in the nitty-gritty of life as we know it.

For you have need of endurance, so that after you have done the will of God, you may receive the promise: “For yet a little while, and He who is coming will come and will not tarry. Now the just shall live by faith; But if anyone draws back, My soul has no pleasure in him.” But we are not of those who draw back to perdition, but of those who believe to the saving of the soul. Heb.10:36-39 NKJV

Now, little children, abide in Him, so that when He appears, we may have confidence and not shrink away from Him in shame at His coming. I Jn.2:28 NASB

And the Lord said, “Who then is the faithful and sensible steward, whom his master will put in charge of his servants, to give them their rations at the proper time? “Blessed is that slave whom his master finds so doing when he comes.” Lk.12:42-43 NASB

And so I pray:

“Keep steady my steps according to your promise,  and let no iniquity get dominion over me.”