My Covid-project these past couple of years has been to learn to read Hebrew, the primary original language of the Old Testament.  Years ago I tried briefly but failed even to distinguish one letter from another.  There was no one to hold my hand and show me how to write the letters and being a visual learner,  that sealed my fate for decades.  But now there is the Internet!  And with YouTube there are teachers and chalkboards and explanations at your fingertips. With these I got the leg up I needed so that when a trusty textbook wondrously appeared at the local Thrift I was ready to gallop away!  And thanks to Covid I could stay the course undistracted by social distractions (what introvert doesn’t welcome the relief of that!) until the task was accomplished.  And now I’ve got just enough knowledge to be dangerous, as they say, but also to be delighted.  One of the very best things learning the language of the ancients has done for me is to S-L-O-W  D-O-W-N my reading of the Word.  As I try to decipher the grammar and vocabulary I hear in my head God talking to real people…and little details I would have rushed past become morsels to savor.  My knowledge is rudimentary but the Word is still living and active, even for a Kindergartner learning to read.

Well, where I’m headed with this is the book of Daniel (which incidentally is written in both Hebrew and Aramaic, the language of Israel’s pagan captors.)  Our Ladies Bible Study group has just finished our trek through this challenging book.  It turned out to be quite a doozer!  (Yay for intrepid leaders willing to step in over their heads in order to see what God will do.)  Well, the Fiery Furnace, the Lion’s Den and the Writing on the Wall are pretty familiar bits.  But dreams and visions infuse the bulk of the book with a great deal of content that is not in Children’s picture books.  These chapters are a little overwhelming to take on in a ladies’ Bible study that is used to reading letters from Paul written to encourage the saints…

“What’s in this for us?” is a question that’s bound to come up.

Now where we may or may not fit in the visions of Daniel is a topic for another day and I’m pretty stoked to tackle it (another day!), believing we should all have a handle on what’s in this book whether or not we understand every last detail.  After all, it is God’s Word, written for our equipping as saints and of especial relevance for the saints living in the times immediately preceding Christ’s return.  Having said that sometimes even the most ardent scholar hopes for a gem of intimate right-now application to drop from the pages.

Daniel 10 held just such a gem for me.  To do due diligence to context, we are in the third year of King Cyrus of Persia here.  Daniel, renamed Belteshazar in hopes he would forget the significance of his own Hebrew name, “God is Judge”, has served for seventy years and counting in the court of pagan kings.  He is an old man now but he has not forgotten his identity as an Israelite chosen by God to bless all the nations of the earth.  And he has lived to see his people freed from captivity in Babylon, just as God promised, to return to their own land to rebuild the Temple of God!  Two years have now passed since that glorious edict (See: Ezra 1:1).  But Daniel is in mourning and has fasted for three full weeks… We’re not told exactly why but perhaps he is distressed about the opposition the rebuilders are facing back in Jerusalem.  He is clearly concerned for the welfare of his people and humbly pleads for understanding.  So God gives him another vision, which leaves him passed out with his face on the ground! Even after the heavenly messenger reassures him and tells him to stand up and listen he finds himself speechless, weak and breathless.  It is in this context that these beautiful words drop:

Don’t be afraid, you who are treasured by God,
Peace to you; be very strong! (HCSB)

Other translations render ‘treasured’ as ‘greatly (be) loved’, ‘highly esteemed’ or ‘precious’, but I love the Holman Christian Standard’s use of the word treasured.  We grow accustomed to hearing that God loves us. He has to doesn’t He? He is love.  But the word used here is not ‘loved’.  It is חמד (‘chamad’) which has the sense of something that is desirable, delightful, pleasing or precious. It is used of the fruit Eve found irresistible in the Garden, and of the Word of God in Ps.19:11—“more to be desired than fine gold.”  It can have the negative connotation of coveting (desiring something that is not yours) and ironically is also used to describe the suffering Servant of Isaiah 53 whom we know to be Jesus.  He had ‘no beauty that we should desire him’, nothing in his appearance to attract us to him…. In short, God was delighted with Daniel.

I doubt if I would have paused at this word had I not already encountered a variant of it a few verses earlier.  I had been picking my way along in the Hebrew text like a Kindergartener trying to decipher Dick and Jane stories, when I came upon the word Daniel used to describe his fast.  He was not only NOT eating meat or drinking wine, he was not eating anything delectable. He had given up all his comfort foods, all tasty treats…”I ate no pleasant bread” is how it literally reads, bread being the term used to refer to food in general.

And now God uses this very term of Daniel.  You are delicious to me.  I find delight in you.   You’re a real treat!

Daniel had qualities God delights in.  Daniel had faith, he had humility, and he cared intensely about the future of God’s people in a world intent on decimating them.  God was well pleased.  Daniel’s heart reflected His own.

Don’t be afraid, you who are treasured by God.
Peace to you; be very strong!

Daniel would need all the strength he could muster to imagine the future events God unfolded via the messenger. Israel’s persecution and suffering were not over. Tyrants would still oppress them.  Many saints would die.  But in this process, allowed by God, they would be refined, purified, and cleansed (Dan.11:35) and in the end, just beyond a time of unparalleled distress, the ‘time of Jacob’s trouble’, when all their human dependencies and strength would be shattered once for all, then…

But this was more than Daniel could comprehend. He cries out “My lord, what will be the outcome of these things?!”  More trouble?! Really?!  But he was basically told that his role in the life of His people and in that of the world powers of his day was through.  The prophecies made were to be sealed up and preserved for those who would be alive when their time of fulfillment had come.  Daniel was dismissed: “Go your way till the end.  And you shall rest and shall stand in your allotted place at the end of the days.”  He would not live to see all the promises of God to his people fulfilled, but he would die knowing he had brought God great delight by his childlike trust in God and His faithfulness to represent Him to the heads of pagan kingdoms.

I am reminded of the Hebrews 11 hall of faith–that synopsis of the feats of faithful saints who by their hope in God won His approval. For ‘without faith it is impossible to please God, for whoever would draw near to God must believe that he exists and that he rewards those who seek him.’

Faith pleases God.  By it we too can know His voice of approval:

“Don’t be afraid, you who are treasured by God.

Peace to you; be very strong.”

And that is a gem I just had to share.  Thanks for the listen. May you know His good pleasure in all you do in His name.

“Now faith is the assurance of things hoped for, the conviction of things not seen.
For by it the people of old received their commendation. “ (Heb.11:1 ESV)

Therefore, since we have been justified by faith, we have peace with God through our Lord Jesus Christ.  Through Him we have also obtained access by faith into this grace in which we stand, and we rejoice in hope of the glory of God! (Rom.5:1,2) 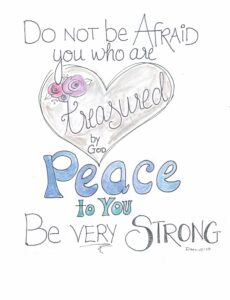 2 thoughts on “Treasured by God”